Vancouver, BC — British Columbians are relying more than ever on smartphones, smartphone activities, and apps, according to the 2nd annual Smartphone Insights Report conducted by Insights West and iamota, a mobile first digital agency. The online survey of a representative sample of 1,027 British Columbians found that nearly two-thirds (68%) own a smartphone, a number that jumps to 93% among 18-to-34 year olds, and 73% among 35-54 year-olds.

“The exponential growth and proliferation of smartphone devices in BC has been nothing short of phenomenal” says Steve Mossop, president of Insights West. “In less than a decade, the number of people using these devices has approached the level of landlines, which took two generations to be fully integrated into society. The fact that smartphone usage has approached TV viewing behaviour means that decision-makers, marketers and policy makers have all been scrambling to figure out the impact on their respective areas.”

Pete Smyth, CEO of iamota, says, “Not only is smartphone penetration on the march upwards… usage and expectations of smartphones owners are on the upswing too. People are using and relying on their smartphones more and more. It’s their phone, computer, TV, music player, and more all rolled into one. They expect to get the information they need at a moments notice within their relevant context.”

Mobile purchases are growing in importance as well, as half of smartphone users (47%) have bought something on their mobile device in the past three months, a number that increases to 70% among 18-34 year-olds.  But so far, m-commerce has been limited to mostly things like parking, coffee shop purchases, and movie tickets.

While smartphone use has grown exponentially and become part of everyday life, many users report particular “pet peeves” with other users. The top irk is when people use their mobile devices while driving for talking, texting, or data, an activity that 87% ‘strongly dislike.’ Other instances of inappropriate mobile use that people strongly dislike are: the use of a mobile device during a movie (78%), talking loudly on a phone in a public place (67%), the use of a smartphone during a meal with others (56%), and finally, the use of a smartphone for either texting or data during a meeting, class or presentation (59%). Some of the other “pet peeves” disliked by smartphones users are: when people are always “on” their smartphones (81%), the excessive taking of “selfies” (68%), the use of smartphones at public restaurants (66%), taking pictures of food at a public restaurant (45%), as well as “checking-in,” when arriving at destinations (40%). 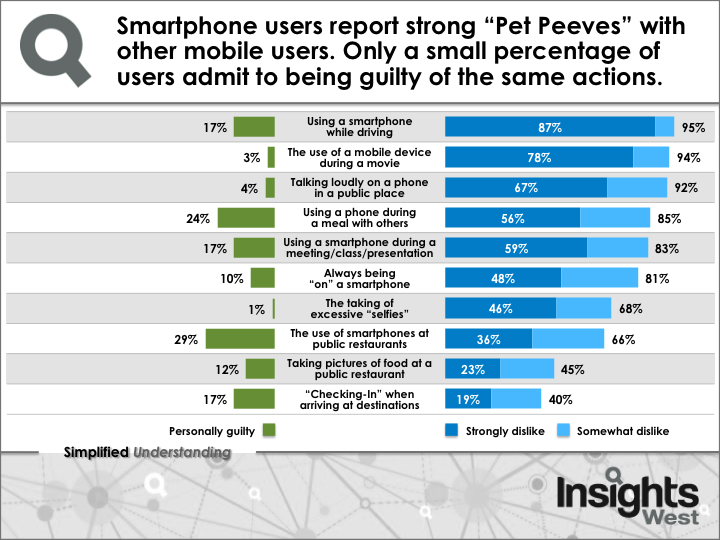 Smartphone users also admit to being guilty of participating in these “pet peeves,” with 29% revealing that they use their smartphones at public restaurants and 24% also confessing to have used their mobile device during a meal with others. A smaller number (17%) admit to using smartphones while driving or during a meeting, class or presentation. Additionally, 12% report taking pictures of their food at public restaurants, while only 1% of people claim to take excessive “selfies.”

iamota is a mobile first digital agency based in Yaletown, Vancouver. They create remarkable digital experiences for people across all screens. iamota has been focused on digital for 19 years and mobile for the past 10 years. That’s three years before the iPhone and all the mobile hype. Today, their digital work is experienced across various screens by millions of consumers each month. And it all starts with a philosophy of making their clients’ lives easier.

Insights West is a progressive, Western-based, full-service marketing research company. It exists to serve the market with insights-driven research solutions and interpretive analysis through leading-edge tools, normative databases, and senior-level expertise across a broad range of public and private sector organizations. Insights West is based in Vancouver and Calgary and has 17 employees.